Excessive speeding and underspeed is the leading cause of accidents. The factors causing traffic accidents in the ten years between 2009 and 2018 were analysed in the report named Traffic Accidents and Control Statistics published by the Police Academic Traffic Institute. One can see that 98,76% of the accidents involving deaths and injuries in the last ten years are caused by human errors when taking into account that the driver error rate is specified as 89,39% in traffic accidents involving deaths and injuries, the pedestrian rate as 8,91%, the passenger rate as 0,46%, the road structure error rate as 0,75%, and that the vehicle error rate as 0,48% in the aforementioned report. As part of the same data:

In light of the data received from the TNP Traffic Presidency , one can see that this situation didn’t change and the violation on “not accommodating the vehicle speed to necessary conditions”, being one of the driver errors came first with a percentage of 38,9% (this percentage is 40,2% in 2018) when examining the traffic accidents happening in 2019. Other violations of drivers caused different accidents with fewer proportions. 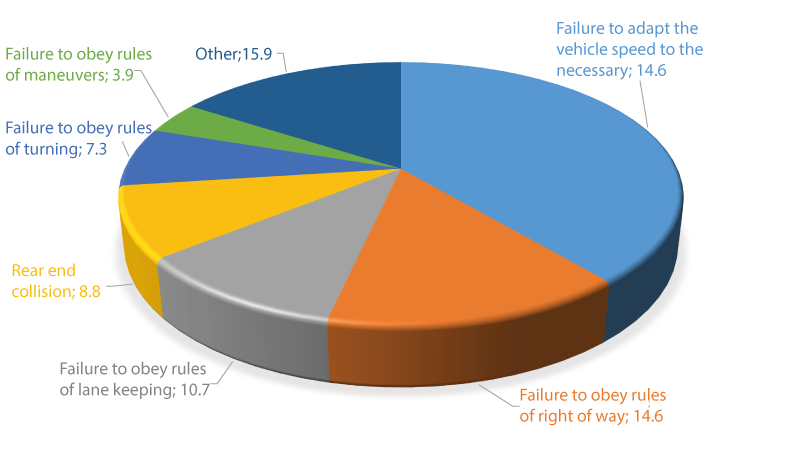 When examining the types of occurrence of traffic accidents happening in 2019, it wouldn’t be wrong to say that the “excessive and inappropriate speeding” factor was primarily and secondarily effective in general. Side-on collision is in the first place with 30%, pedestrian collision in the second place with 18,1%, and run-off-road in third place with 14,3%. We can understand that this ordering didn’t change in 2018 according to the data from the TNP Traffic Presidency . 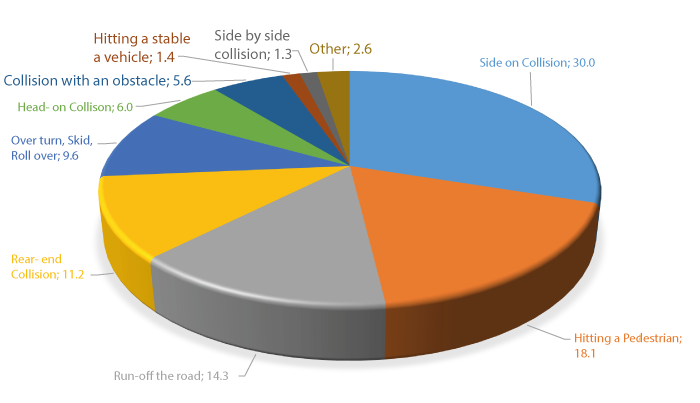 Distribution of Traffic Accidents in 2019 by Types of Occurrence

It is necessary to determine safe and proper travel speed in the entire road network in Turkey.

Safety problem in the road traffic finding the expression as “The faster you drive, the more risk of an accident you have” takes place near the top amongst the causes of traffic accidents in the analyses made in the recent years. The faster the vehicle goes, the longer the braking distance of the vehicle grows.

The average reaction time of a driver is 1 second when there is a dangerous situation or emergency while driving under normal conditions. Taken with this measurement, the driver of a vehicle moving 80 km/hrs will think for a second then decide to put on the brakes when encountering an immediate danger, and the vehicle will have covered 22 meters of distance over a speed of 80 km/hrs in this 1 second. The braking distance will kick in by the laws of physics after the driver applies the brakes, and the vehicle will be able to stop at a distance of 57 meters in total from the point where the danger was felt.

Safe speed decreases the stress over other road users including the passengers and ensures the safety that other people can comfortably ride their bicycles, move as pedestrians, or walk with their children on the pavement. To practice the struggle against an effective speed:56

Activities will be conducted, and regulations will be made to ensure that the road users prefer travel speed pertinent to the design of roads with the action plans prepared within the scope of the 2021-2030 Traffic Safety Strategy Paper and this strategy paper. Taking engineering measures and enhancing standards in the roads with vital importance for the economic vitality and development and being important in terms of freight and passenger transport and road sections where there is a high risk of accident, and taking speed lowering measures methods in other road sections will be followed up.

Although lowering down the speed appears to be a measure increasing the travel cost economically at first glance, it also appears to be a factor reducing the costs originating from the potential loss of life, the risk of getting injured, and damage due to traffic accidents as well as ensuring that the road structure and vehicles wear out less, and reducing air pollution, carbon emission, and environmental noise. The country will be ensured to have a more balanced transport structure by the other transport modes alternative to road transport taking primacy with the innovation efforts to be made to lower down the operating speed in the roads.

Complying with the speed limits determined, no matter what they may be, and the speed controls have serious benefits in terms of traffic safety. “Effective, consistent, and intensive” controls are still conducted in Turkey and an approach, underlying that the road users are controlled “every time and everywhere”, is followed up to prevent the drivers from speeding up, and the “Perceived Risk of Being Caught” is kept alive with other methods assisting control such as the “model vehicle”.

Moreover, control systems and controls clearly identified for everyone to understand were also conducted with horizontal and vertical signing in approach direction, especially the Average Speed Violation Detection Systems in road sections with high risk and especially 2.155 km long roads in Turkey.

A significant decrease was ensured in traffic accidents involving death and serious injuries, happening in road sections where the Average Speed Violation Detection Systems were set up.

The approach on strengthening the speed controls by promoting Average Speed Passageways (Average Speed Violation Detection Systems) put into practice in the field of speed management in the recent years constitute one of the priority fields of the 2021- 2030 Traffic Safety Strategy Paper.

Regarding the fact that excessive speed and speed that isn’t suitable for the road are the leading causes of deaths and serious injuries in traffic accidents, the Average Speed Passageways (Average Speed Violation Detection Systems) will be promoted with recently developed projects and the travel of road users with a safe speed will be ensured in more areas and road sections. Furthermore, this control method will also be supported with other control methods in road sections specified as having high risk and Accident Black Spot.

It is considered that such developments as the Intelligent Speed Assistance (ISA), evaluated to be put forth with the adaptation of technological advancements to the vehicle production, will provide convenience for the drivers displaying behaviours pertinent to the rules, and assist them in terms of driving the vehicle at speed limits by the year 2030 when this Strategy Paper will be valid. Strengthening speed controls with in-vehicle technologies will assist in ensuring fewer accidents and loss of lives on our roads.

The average speed violation control systems are aimed at being promoted in a way to cover the entire road network in urban and intercity roads. Besides, the ECSs, established as part of the Annex Article 16 of Road Traffic Law No. 2918, will also be based on average speed controls rather than instantaneous speed.

More speed controls will be performed across the country, especially in night and passageways with high traffic volume. In the context of the fight against excessive speeding and underspeed, the efforts on eliminating the speeding behaviours with the temporary suspension of the driver’s license will be evaluated.

One can understand from the researches conducted that in cases where the speed signs were indicated clearly and understandable and with horizontal and vertical signs and panels, the drivers displayed the behaviour to comply with the speed limits more and that the accidents due to speeding decreased.

Perception of Speed in Traffic

PREJUDICE: WRONG
Lowering speed limits has limited impact on accidents. The travel duration elongates due to not being able to cover distance fast enough and result in unnecessary time and economic loss.

THE RESULTS OF THE SCIENTIFIC RESEARCH:
CORRECT
The researches conducted reveal that the time lost due to complying with the average speed determined for traffic doesn’t have any serious impact on the total travel time. For example, lowering the maximum speed from 100 km to 60 km in a 15-km road section causes the driver to lose 4 seconds/km and in total 50 seconds in this 15-km road section57, however, in roads without speed regulations, the total travel time elongates due to the traffic congestion, traffic disorderliness, and accidents happening due to
the disorderly speed preferences of road users. Furthermore, the fuel consumption increases due to rapid acceleration and deceleration originating from irregular speed, environmental damages occur due to excessive fuel consumption, and much more socioeconomic costs arise individually and socially due to traffic accidents resulting from disorderly speed.

FIGHT AGAINST EXCESSIVE AND INNPPRORİATE SPEED

STRATEGIC OBJECTIVE: Prevention of Loss of Lives by Fighting Against Excessive Speed and Speed That isn’t Pertinent to Road/Vehicle Structure

FIGHT AGAINST EXCESSIVE AND INNPPRORİATE SPEED